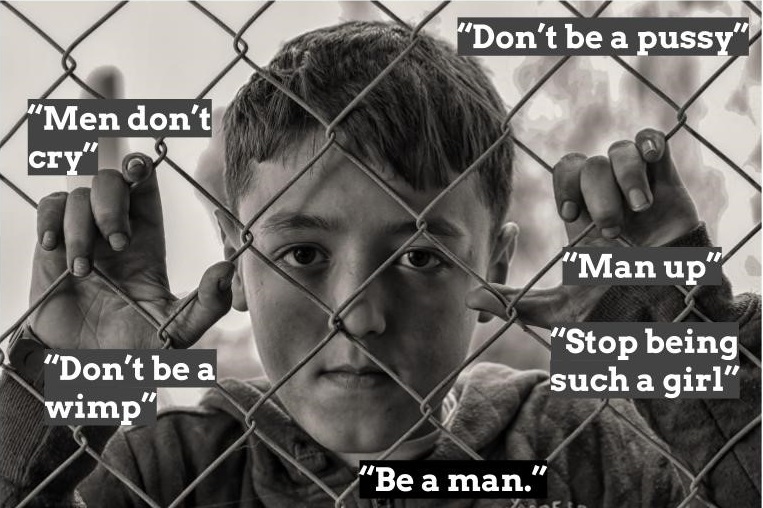 In the process of attributing traits which were eventually imposed on women, what we can say are the by-products of this rigidity are ways of behaving associated, or more radically saying, imposed on man. Initially, this term was used in the mythopoetic men’s movement of the 1980’s and 1990’s. From then it has been widely used in academics and popular writings. Other than having its bad impact on women, toxic masculinity had a severe impact on the mental, physical and social health of men.

This culture pressurized men to behave in a certain fixed manner.  Now let us discuss those ways in which man will be called ideal. They are like;

END_OF_DOCUMENT_TOKEN_TO_BE_REPLACED

Celebrated annually in June, with the onset of Monsoon season, Ambubachi Mela is one of the most unique festivals hosted in India’s Guwahati. It’s organized at the Kamakhya Temple, perched on the top of Ninanchal Hill, the temple being one of the most important tourist destinations of Assam. It’s said to be associated with the Goddess Kamakhya and stands true to the story that surrounds her.

According to the Legend, an angered Kamakhya jumped into the fire because her father insulted Shiva. As a result of which, Shiva performed Tandava, holding Kamakhya’s burning body. If nobody had stopped Shiva from completing the Tandava, the world would have been destroyed. And so Vishnu used his Sudarshan Chakra to cut Kamakhya’s body into 5 parts. The temple now stands where her genitals and womb fell. There is no idol in the temple but a yoni (female genitalia) shaped rock with a hot spring flowing over it.

END_OF_DOCUMENT_TOKEN_TO_BE_REPLACED

FEMINISM IS FOR MEN TOO

“All men should be feminists. If men care about women’s rights the world will be a better place. We are better off when women are empowered – it leads to a better society.”
– John Legend

“Feminism is a range of social movements, political movements, and ideologies that aim to define and establish the political, economic, personal, and social equality of the sexes.”

When we seek to understand what Feminism encompasses, it becomes important to understand it as an inclusive concept rather than being restricted to one specific gender of the society. Feminists are trying to establish the inclusivity of everyone’s rights, irrespective of their gender identity. It is not about criticizing the so-called ‘male gender’ for all the wrong that has been inflicted on women. Instead, Feminism is a fight for gender equality.

END_OF_DOCUMENT_TOKEN_TO_BE_REPLACED

Nigeria, 7th most populated country in Northern Africa, is a multi-ethnic country. The land is gifted with vast quantities of natural resources. It stands sixth at oil-production and has well-educated and flourished industries. It has a very diverse culture and it differs as we move down from North to South. The 208 million people living, are divided into many ethnic groups which speak over 527 languages and have more than 1150 dialects.

END_OF_DOCUMENT_TOKEN_TO_BE_REPLACED

Active Euthanasia: Should it be Legalised in India?

India is a secular country and a land of diverse cultures and beliefs. The kind of miscellany that can be seen in a country like ours is inimitable. Despite having huge distinctions and variance in opinions, the things that bind us together are relations and emotions. The worth of the life of an individual is indispensable. Every possible effort is taken forward by the family and relatives to cure the patient and afford him/her a whole new life. Whereas the cases like Aruna Shanbaug, where she was in a vegetative state for 23 years because of the sufferings of the sexual assault by a sweeper brought the concept of Mercy-Killing or Euthanasia of the public and legal attention.

The term is derived from the  Greek words, Eu which means good, and Thanatos referring to death. Hence, the literal meaning of Euthanasia is ‘Good Death’. Euthanasia, assisted suicide, or mercy killing refers to deliberately terminating the life of an individual painlessly if he/she is a victim of inoperable agony of utter unconsciousness or illness.

END_OF_DOCUMENT_TOKEN_TO_BE_REPLACED

NAMASTE AND SALAAM IN INDIA

India is a secular country. It includes different cultures and embraces diverse traditions. Every religion has its unique way of greeting people, offering respect, and praying to the divine. While it’s Namaste for the Hindu community, the Muslim community adopts the Salam. The difference in the Etymology remains, but the intention is the same. Both these gestures hold some significance and there remains more to them that should be known. The following article focuses on the same – the two out of many ways of greeting our fellow mates India has taught us over the years.

END_OF_DOCUMENT_TOKEN_TO_BE_REPLACED

A DAY IN NORTH KOREA

A DAY IN NORTH KOREA

North Korea is a country in East Asia with the capital Pyongyang, a major industrial and transport center. It has been one of the world’s most secretive countries. The country is a home to 25 million people under a form of communist rule which strictly controls all areas of daily life.

All TVs and radios are tuned to state channels and people caught listening to foreign broadcasts face harsh punishments meaning that people of the country have little or no knowledge of world events. The Korean Central News Agency controls the dissemination of information, and all papers are strictly censored.

END_OF_DOCUMENT_TOKEN_TO_BE_REPLACED

THE BATTLE OF SARAIGHAT

“My Uncle is Not Greater than My Country.”

This is a very familiar phrase in Assamese culture and today, it stands as a reminder to one of the most pivotal points of Ahom history. The lesser known Battle of Saraighat played a very significant role in Indian history, just like the famous Battles of Panipat, Haldighati and Plassey. We often talk about the Marathas and the Rajputs but very few of us are aware of the Ahoms who ruled the eastern part of India and played a major role in the contribution of Indian history.

The Ahom kingdom was centered in the state of Assam. In India, Assam was the only state that defeated 17 successive attempts of invasions by the Delhi Sultanate and the Mughal Emperors. While the rest of India was struggling to fight against the Mughal Rule, the Ahom Dynasty was one of the longest ruling dynasties, maintaining their sovereignty for nearly 600 years (1228–1826).

END_OF_DOCUMENT_TOKEN_TO_BE_REPLACED

A long time back, slavery was banned and universally condemned but it still persists in many corners of the world, victimizing millions of people. Half of the victims of modern slavery are in debt bondage or are women and girls, in particular, consists 71 percent of the victims of this modern slavery. It exists at times when a person is compelled, recruited, or transported to work by force, coercion, or fraud. This kind of slavery mostly exists in low-skilled and labor-intensive industries.

END_OF_DOCUMENT_TOKEN_TO_BE_REPLACED

IS MEDIA CLOUDING OUR PERCEPTION OF MASCULINITY?

END_OF_DOCUMENT_TOKEN_TO_BE_REPLACED

Sari is a traditional dress worn by the women belonging to India and some surrounding countries including Nepal, Pakistan, Bangladesh. It is derived from its Sanskrit origin word ‘Shati’ meaning ‘strip of cloth’. ‘Sari’ evolved from ‘Shatika’ which in Hindu literature means women’s attire. It consists of and unstitched cloth measuring from 4.5 metres to 9 metres in length and 6 metres to 12 metres in breadth. It is wrapped around waist and the other end is flung over the shoulder. A sari is wore with a blouse called choli and a petticoat called ghagra or parkar in Marathi. Some sari folds need to be held with stitches or pins, others are more free form, like fabric origami for the body. The Rig Veda mentions about saris. The sculptures dating six centuries ago had draped garments. The fashion of wearing Sari can be traced back to the times of Indus Valley around 2800-1800 BCE. The dyes used then for instance indigo, lac, red madder and turmeric are still used in making traditional pieces. After some years silk was woven to create dresses. Saris are symbol of national pride, ambassadors for traditional design and craftsmanship. These are best suited to India’s hot climate.

END_OF_DOCUMENT_TOKEN_TO_BE_REPLACED

Gangaur is a festival celebrated throughout Rajasthan and in some parts of Gujarat, Madhya Pradesh, and West Bengal.

The festival is done by people to pay their respects to Goddess Parvati, also known as Gauri. It’s a festival to celebrate love and marriage. In the festival, both married and unmarried women participate with warmth and passion. People make clay sculptures of Parvati and Shiva, they offer prayers to them and dress the sculptures. Along with all these, people also observe a day-long fast. This is done because people believe that this will lead to a long and happy married life. Goddess Parvati is the goddess of love and marriage for Rajasthani people, and thus the festival is of utmost importance and joy to them.

END_OF_DOCUMENT_TOKEN_TO_BE_REPLACED

The distinction between vices and crimes is crucial to understand the nature of both these things, many people conflate vices and crimes and consider one is the same but is this true? Are vices crimes, so first, we need to know what is vice? What is a crime? And what differentiates them. To consider an act crime there should be two important things present in a particular act i.e.,’mens rea’ that is a guilty mind and ‘actus reus’ which means an act in which is done in furtherance of the guilty mind, these two are the essential elements of the crime.

END_OF_DOCUMENT_TOKEN_TO_BE_REPLACED

FROM STRICTLY ARRANGED TO SEMI- ARRANGED

There is no more lovely, friendly and charming relationship, communion
or company than a good marriage. — Martin Luther.

Unlike the saying, &quot;When it comes to love, age is just a number&quot; the perception behind Indian marriages is to &quot;settle down&quot; when you reach a certain age. The fear may be that as you grow older, you might not find the right person or no person at all. It is the year 2020, but the fact
remains the same in every caste and community.

END_OF_DOCUMENT_TOKEN_TO_BE_REPLACED

Whether we like it or not we must realize that politics is an important part of our life, often in our life, we try to decipher it and discuss it, people argue more about politics excitedly than anything else, rush for discussing politics never stops. It isn’t a higher form of art or sports like football, cricket, hockey, etc., but we still can’t stop talking about it, the main reason behind this is that politics is about power and who yields it over others and that makes it even more interesting and fascinating.